A Brechtian Destruction of the Joy of Lego 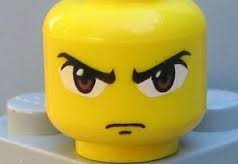 We are very angry at Lego, in my household. Very.

This is a big spoiler alert, so, just, like, if you give two shits about the new Lego movie, just skip this blog entirely. Cuz we’re going to ruin it for you:

It turns out, Legos don’t move on their own.

Now, for those of you who don’t have kids or don’t have kids who play with Lego, or whose children no longer USE their imaginations, (in which case I have a really nice and appropriately expensive child therapist for you as well as a few decent parenting books you’d do well to read… and a really nice and appropriately expensive adult therapist… and a connection to a really nice and appropriately expensive pot dealer) for those of you listed above, really, seriously, just go read something else. Or watch Duck Dynasty. Cuz you won’t get the importance of this brilliantly insightful and irreverent piece of writing I am embarking on. (It’s only three more paragraphs, though, and one of them is really short, so you could also just skim the rest and feel righteous.)

Look, this is really important, people. You cannot break the fourth wall of a Lego movie and get away with it! The POINT is that Lego is make-believe and, yes, every kid knows that but they don’t want it thrown in their face!! Sheesh! I mean love ya Will Ferrell, but how did you agree to this?!?!? You yourself are a giant kid! What happened??

Ugh. We came out of this movie livid and insulted, feeling like our innocence had been shattered. And our son was upset too.

And we were not alone. No. My son reported that the talk of the men’s restroom was that every other 11-year-old boy in there was appalled as well. Friends, a riot is brewing among the 4’10” masses. Don’t fuck with the youth of today. They are smart, they are savvy, they know your manipulative tricks. They know you were ignoring their artistic sensibilities and just making a play for the parents in the audience who would be more inclined now to buying a copy of the DVD. But no one under 12 will watch it ever again. That puppy will go out on the stoop with its plastic wrap still on, still in the box. Unlike Legos themselves. And if you are that kind of adult, with first edition Legos still wrapped from your childhood, then, well, that explains why you liked the movie. And see paragraph #4.